A page of Victor Manta, Switzerland

The Romanian people, sick and tired of 45 years of an oppressive regime, of the dictatorship of the unique Communist party and of the person who represented it during the last 25 years, the dictator Nicolae Ceausescu, upraised against and deposed the regime in December 1989. During the revolt, some mysterious forces, that weren't identified till now, have shot on mainly disarmed citizens who manifested for freedom on the streets of Bucharest, the capital of Romania. The army, who quickly rejoined the demonstrators, has retorted the unseen killers with guns and sometimes with artillery.
During these street battles many objects were damaged, traces of bullets and of fire being seen during many years on the buildings of Bucharest. Unfortunately the paintings found in the National Art Museum have also suffered severe damages.
These damages have profoundly impressed the amateurs of art and the population alike and for this reason on October 25, 1990, only 10 months after the described events, the Romania postal administration has issued a quite unusual set of six stamps, showing damaged masterpieces of Romanian and foreign masters. All stamps of the set mention on the top Tablouri împuscate, with the meaning Shot Paintings.

On the paintings displayed on the right and below you can see the impacts of bullets. The stamps were probably issued quite quickly and for this reason they are of a rather inferior quality, as compared with the stamp on the left side, This one displays the same painting, and was issued by the same country 22 years earlier, in 1968. This masterpiece of Romanian art was painted by Stefan Luchian and represents Old Nicholas, the Cobza (Zither) player. Scott numbers: 2000 and 3620 respectively. 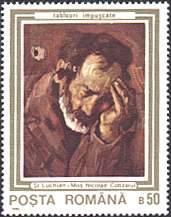 All in all an impressive set, acting as a memory flash and revealing a short piece of recent history that has shaken one more country in the tormented Balkan Peninsula.

Notice. This wasn't for the first time that Romanian masterpieces or their legal holders suffered - just an example. In the year 1956, after 39 years, the government of the former USSR returned to Romania some works of art belonging to Romanian museums, works evacuated in 1917 during the WW I by the Romanian government. Among these were also the paintings of the renown Romanian artist Ion Andreescu. Unfortunately, when they come back, the specialists discovered that many of these paintings were replaced by fakes. Of course nothing could be done against the great "friend" and "liberator" from the East. Source: Ioan Andreescu, p.9. ALCOR EDIMPEX, June 1997, ISBN 973-97901-4-3. This hasn't hindered and has even encouraged the Romanian government to requisition, during the mentioned 45 years of communist dictatorship, numberless works of art from their legal, private owners.

Roughly 10 years after their issue, the first five values of the set were surcharged with a new value of Lei 1700, that corresponds to the fee for a domestic letter. The old face value was covered by a black image of an easel, in the "tradition" of all recent overprints of the Romanian post.

To cheer up the things, during a trip to Romania I have let cancel a whole set on a letter. I have chosen a date that tells something to me, that of September 19, 2000, the day of my birth anniversary. The clerk at the postal office No. 45, on the Brezoianu Street in Bucharest, has done it with a lot of professionalism and even with an obvious pleasure when I have told her why have I chosen that very day.
Please notice that the value of Lei 5 wasn't surcharged, probably because it was already out of stock, due to its limited printed quantity of only 250,000, as compared with 800,000 to 3,000,000 for the other stamps of the set.
The image above shows only the upper part of the cover, that has in its bottom part other two stamps, in order to attain the value of Lei 12,300, the price of an air mail letter sent from Romania to Switzerland. Actually a quite high price for the income of most of Romanians.

Links to other Romanian pages on the Arts on Stamps site: