Below and on subsequent pages are shown some wonderful old Chinese paintings, issued on stamps by the General Directorate of Posts, Republic of China (Taiwan). Due to the great interest for them, worldwide, some of these stamps became quite scarce and accordingly expensive. The typographic quality of these stamps is very high.  Many of them were printed in Eurpoe, by the renown printing houses Couvoisier SA (Switzerland), Joh. Entscheden Zonen (Holland), Thomas de la Rue & Co., Ltd., London (England) or in Japan and Taiwan. Please point on the individual stamps with the mouse index to get some additional explanations.

The old Chinese masters treated a multitude of subject, being focused especially on people and nature (wonderful landscapes, animals like dogs and horses, birds), painted in light tones, on such fine materials like silk or on such special supports, like fans. On this page you see a small extract of what the Chinese artists have imagined and realized during a long period of time. Please visit the following pages and share my admiration for these magnificent artists and their work. Eventually read below a short story of the Beautiful Island, as a is reminder for those who wish to understand why Taiwan island and his people was and remains a never ending story in the news.

Taiwan or Formosa (The Beautiful) is a island province of China and, since the Communist victory in 1949 on the Chinese mainland, the seat of the government of the Republic of China. It is separated from the Chinese mainland by the Taiwan (Formosa) Strait and is bordered on the north by the East China Sea, on the east by the Pacific Ocean, and on the south by the South China Sea. The People's Republic of China also claims Taiwan as one of its provinces. 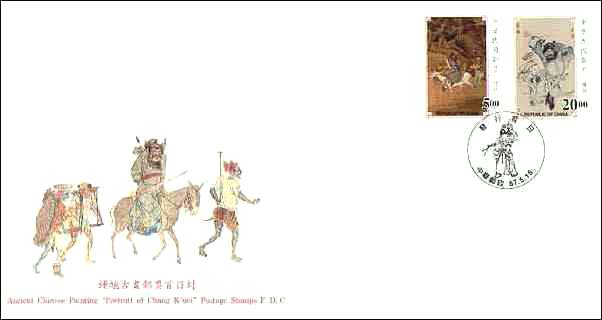 On December 8, 1949, following occupation of most of the Chinese mainland by Communist armies, the Nationalist government of China, led by General Chiang Kai-shek, established its headquarters at Taipei. Communist plans to invade Taiwan were subsequently frustrated by the United States, which in 1950 sent naval forces to defend the island after the outbreak of the Korean War caused a stiffening of US policy. For the remainder of the 1950s, despite sporadic hostilities between Taiwan and the mainland, the United States Seventh Fleet in effect shielded the Nationalist government from invasion by the Communist regime in Beijing.

Of great significance was that the island had become a showcase of modern economic health, with a growth rate far exceeding that of most other Asian nations. At the beginning of 1979 the United States formalized its relations with the People's Republic, thereby ending its ties to Taiwan, although the nations' trade and informal communications continued under the Taiwan Relations Act. A year later, in January 1980, the defense treaty of 1954 lapsed, but the United States remained a forthright vendor of defensive arms to Taiwan. By 1981 relatively few nations still maintained formal diplomatic relations with Taiwan, but the country's international trade suffered little damage.

Sources for this and the following pages: Microsoft Encarta  World Edition 1996, information furnished by the General Directorate of Posts, Republic of China (Taiwan), and the Scott and Stanley Gibbons catalogues.