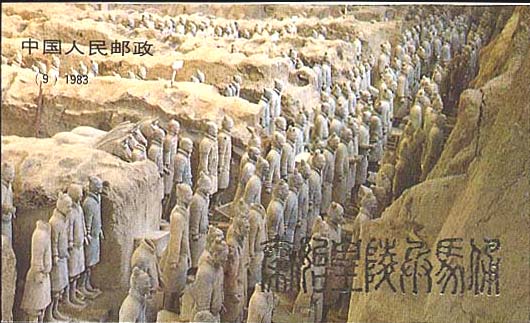 China, June 20,1990 Bronze Chariots Unearthed from the Mausoleum of the First Emperor of Qin

Background:
The First Emperor of Qin Dynasty (221 B.C. - 207 B.C.) was named Ying Zheng (259BC-210BC). He was the king of the Qin State in the Warring States Period, founder of the Qin Dynasty. From 230 BC to 221 BC, he wiped out six states and set up the first centralized unified feudal country. The whole country was divided into 36 administrative prefectures, each prefecture consisting of counties. The highest ruler was called Huangdi (Emperor).
The First Emperor's tomb was located in Lintong County of Shaanxi Province, thirty-five km west of Xi'an. In the early spring of 1974, in the east part of the tomb was found the Qin terracotta warriors. In December of 1980, in the west part of the tomb were unearthed two carts with earth horses, which appeared very lively. 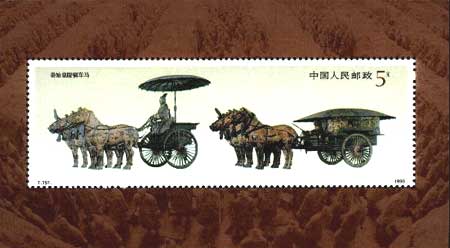 Design:
This sheet shows the image of two unearthed bronze carts. The two carts, when unearthed, were lined one before the other. The first one was driven by four bronze horses. After the cart and horses were molded, they were processed through filing, friction, punching and drilling. Embedded-casting, welding, riveting, chaining, nailing and other technologies were applied to link parts together. Its exquisite manufacturing technology reflected the outstanding creative capability of the Chinese people 2,000 years ago.
Acknowledgments: Many thanks to Sier, China, for the scans of the 1990 issue and for the text. 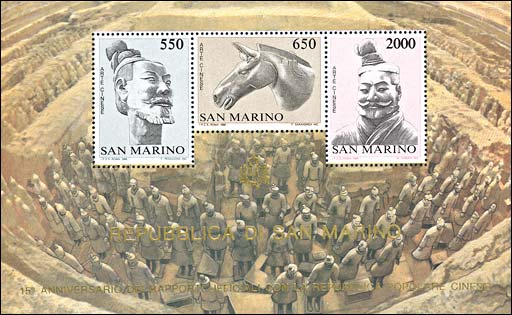 A nice set with wonderful FDCs and interesting cancels!