Goya (y Lucientes), Francisco (Jose) de, consummately Spanish artist whose multifarious paintings, drawings, and engravings reflected contemporary historical upheavals and influenced important 19th- and 20th-century painters. He was born in Fuendetodos (Zaragoza), and was apprenticed to Jose Luzan and Francisco Bayeu, whose sister he later married. He went to Italy and upon returning to Spain, he painted frescoes for the local cathedral in Zaragoza, and painted carton (designs) for the royal tapestry factory in Madrid, mostly scenes of everyday life. At the same time, he became established as a portrait painter to the Spanish aristocracy.

He was elected to the Royal Academy of San Fernando in 1780, named painter to the king in 1786, and court painter in 1789 ( was appointed first Spanish court painter in 1799). A serious illness in 1792 left Goya permanently deaf and he became increasingly occupied with the fantasies and inventions of his imagination and with critical and satirical observations of mankind. He evolved a bold, free new style close to caricature. In 1824, after the failure of an attempt to restore liberal government, Goya went into voluntary exile in Bordeaux (France), continuing to work until his death there in 1828. (Source: http://www.spanisharts.com/prado/goya/bio_goya.htm)

His masterpieces in painting include the renown paintings "The Naked Maja" (La Maja Desnuda) and "The Clothed Maja" (La Maja Vestida), both painted between 1797-98. The Naked Maja was called "gypsies", matching the clothed Maja. It creates a new nudity form, later followed by other painters, specially in France. Speculations about models for this work have been very numerous: nowadays it's believed that he used several women, ones for the face and others for the body. Goya's use of light is really splendid, obtaining an intimate and tinged atmosphere.

The Clothed Maja repeats the naked Maja's composition, both in structure and in the model's position. But changes are clear in colors and general atmosphere. Goya is believed to have used a different model, more stylized in this case.

During the Napoleonic wars ‘The Rokeby Venus’, by Velasquez (see above, on the left) belonged to the Minister Godoy, Prime Minister and effective ruler of Spain.

It was probably the inspiration for Goya's paintings of the naked and clothed Majas, which might have been made for Godoy and certainly belonged to him. The Rokeby Venus is shown at the National Gallery, London. Goya's Majas paintings are exhibited at Museo del Prado in Madrid. The author of this page had the privilege to admire both of them at the National Gallery during a special exhibition.

Goya was called before the Inquisition to explain his portrait of The Naked Maja. They wanted to know why and for whom he had painted the 'obscene' picture. The consequence was that he wasn't allowed for painting anymore for the court. Although Goya retained his title and his income, he had to purchase a country villa and to move there, and his work from hereon was done for himself and a select audience of friends. The villa became known as los Quinta del Sordo, the House of the Deaf Man, and it is conceivable the stress of situation in Madrid had seriously affected his health. Certainly, his first months in the house were spent in the grips of just another illness, and as he began to convalesce, he began to paint. On the walls of the villa he produced eighteen murals known today as the Black Paintings. (After: http://www.tabula-rasa.info/Dark Ages/FrancescoGoya.html). 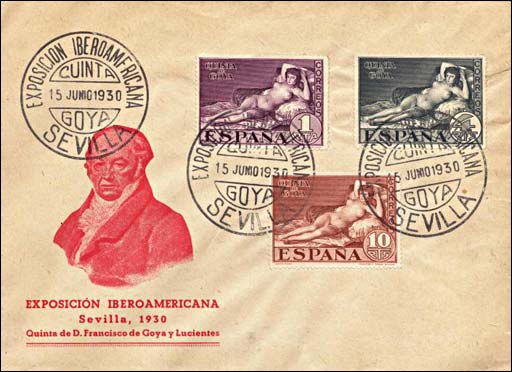